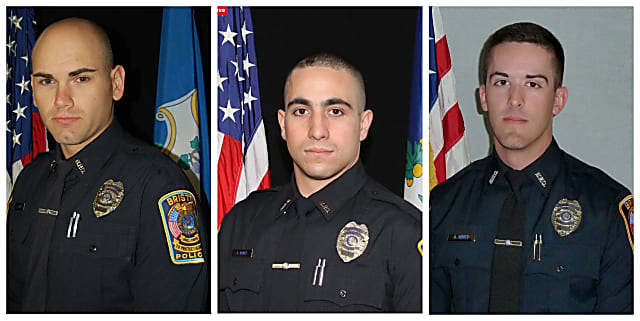 Two Connecticut police officers who were fatally shot and one seriously injured during a call for a domestic incident have been identified.

The incident took place in Hartford County around 10:30 p.m. on Wednesday, Oct. 12 in Bristol, near the headquarters of ESPN.

Sgt. Christine Jeltema of the Connecticut State Police said at a press conference Thursday, Oct. 13 that the three officers responded to 310 Redstone Hill Road for a reported domestic violence incident between two people.

When officers arrived at the home, one person was outside of the home, and shots were fired, killing one officer, state police said.

The second officer died at the hospital, and the third was seriously injured and immediately sent into surgery, officials said.

The suspect was shot and killed at the scene, Jeltema said.

The suspect’s brother was also shot and transported to a hospital. His condition was unknown, Jeltema added.

“Words can’t express the sadness and grief that brings me before you this morning,” Gould said.

DeMonte is survived by his pregnant wife, two children, parents, and two siblings, the chief said.

He has been with the department for more than 10 years and during that time won several awards including the Officer of the Year in 2019 and the Silver Star, Gould said.

Hamzy was born in Bristol and graduated from Bristol Eastern High School. He had been with the department for eight years as a patrol officer, Gould said.

He is survived by his wife, parents, and two sisters.

The chief said Iurato is a member of the department’s emergency response team and he holds a bachelor’s degree in government, law, and national security.

Bristol Mayor Jeff Caggiano said: “Today, our hearts are broken. We are united in immeasurable grief for those hero officers, for their families, and friends, and for all of our law enforcement personnel. Bristol and the entire nation need to wrap our arms around them as well as our own loved ones.”

This continues to be a developing story. Check back to Daily Voice for updates.

New photos of a fire that displaced residents of a Northern Westchester senior housing complex and sent some to the hospital have been released by officials. Earlier Report – 11 Residents Of Senior Living Complex In Hospital After Fire In YorktownThe photos show extensive damage to one of the… Yonkers Daily Voice…

A teenage woman has been accused of attacking a female officer during an incident in the Hudson Valley.It happened on Thursday, Dec. 15 in Rockland County.Ramapo Police say officers responded to a Wesley Hills home for a report of a female causing an issue. When the first officer arrived, he f… Yonkers Daily Voice…

A Limited Liability Company based in Westchester County has claimed a “$1,000 A Day For Life” lottery prize.Asono-Hende LLC of Yonkers won a top prize from the CASH4LIFE drawing on Sunday, Sept. 4, New York Lottery announced on Monday, Nov. 28.A top prize from the game guarantees a minimum pay… Yonkers Daily Voice…

Want to post on our blog? Submit an article